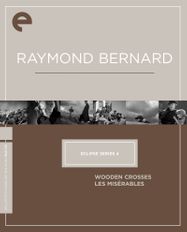 One of the greatest and least-known directors of all time, Raymond Bernard helped shape French cinema, at the dawn of the sound era, into a truly formidable industry. Typical of films from this period, Bernard's dazzling dramas painted intimate melodrama on epic-scale canvases. These two masterpieces—the wrenching World War I tragedy Wooden Crosses and a mammoth, nearly five-hour Les misérables, widely considered the greatest film adaptation of Victor Hugo's novel—exemplify the formal and narrative brilliance of an unjustly overshadowed cinematic trailblazer.