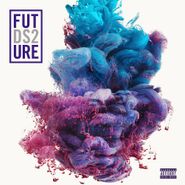 The Atlanta rapper comes back with his third studio album and sequel of sorts to his breakout Dirty Sprite mixtape. Impressively, DS2 does away with nearly any guest spots—the lone guest appearance is by Drake, on “Where Ya At,” in which Drake provides clear-headed respite from Future’s dizzying autotune garble. But this is Future’s show, and his variety of voices and cadences on a track like “Groupies,” over clattering production by Metro Boomin, Sonny Digital and Southside, proves he has enough ideas and personality to carry an album on his own. Lyrically, Future isn’t reinventing the wheel, rapping largely about women and purple drank, but it’s always been more about the way in which he says them, layering various processed vocal bursts on “Lil One” ‘till it’s an army of Future. And when he does get a good line in—“Thought It Was a Drought’s” “I just took a piss and I seen codeine coming out / We got purple Actavis, I thought it was a drought”—he hooks you to stay and get lost in the funhouse of Southern beats and rapid-fire vocal riffs. The deluxe version includes five extra tracks, including the spacey “Trap N*****” and “Fuck Up Some Commas,” an awesome English teacher’s nightmare whose quick spurts make any language trappings seem like a joke.