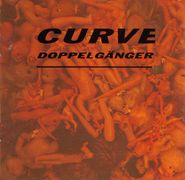 This is another one of those album covers that just brings me back to the early 90s. I love this band. Can't exactly remember how I first got into them. But I think a friend played the album for me. Curve were similar to Lush. But maybe a bit darker. Less ethereal. More similar to a band like Chapterhouse than a band like Cocteau Twins. They were also similar to Lush in that they first released a couple EPs that got people interested in them before their first album came out. Doppelganger was their first album and it came out in March of 1992. Both my shoegaze and goth friends loved Curve. They fell somewhere in between. You could hear them in a goth club or at an indie club. Curve was fronted by Toni Halliday on vocals. I am not putting any album on this list that have not held up over time. I loved Jesus Jones in the early 90s but the album just doesn't hold up over time! But this Curve album is just as good as when I first heard it. It is actually a really sexy album if that makes sense. Dark and dreamy and dancey. I feel like everyone liked this album when it came out. They were not popular for that long. But this album really got a lot of people excited about Curve. They released Cuckoo the next year and a couple more albums after that. But it is really just this album that I was into.