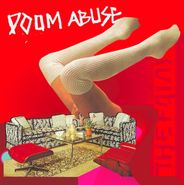 I knew an older girl in high school who was a great painter and very mean in the casual unprovoked way that disaffected high schoolers often are. We had some art classes together and at some point, for some reason, she made me a mix of music that mostly scared me but also turned me on to the Faint. I wasn't a goth but that didn't stop me from being miserable and Todd Fink's sneering skater-brogue painting portraits of a world where everyone was bleeding and dying and had spinal injuries sprawled out in suburban pools and on kitchen tiles really resonated with me. On Doom Abuse, the snottiness has been toned down, replaced with a self-awareness that, if they had before, they didn't let on to. Overall, the songs are poppier, less bleak, but, oddly, peppered with harsher electronic glitch and noise than the band has ever used. The techno-interfaced image of suburban and urban teenage misery is relatively unchanged, tracking likes on Facebook and Instagram resulting in serotonin failures, disappointment, dejection, alienation; these emotions aren't going anywhere and though the technology has changed, they still need a voice.