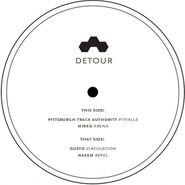 Pittsburgh's given us the prolific Pittsburgh Track Authority and Chase Smith (WT Records, Argot) as of late, and the new Detour label evidences the city is emerging as midwest (ish) hotspot for underground sounds. Remarkably consistent in style for a V/A, PTA starts things off with straightforward Detroit techno, reminiscent of prime Carl Craig. Mirko (who has also released on Ithaca's excellent Blank Slate), goes dark with "Arena," nestling a cool didgeridoo-like bassline within austere, Function-style techno. The young producer Naeem is responsible for the comp's most adventurous track, a gritty house track that mixes tough percussion and dreamy melodies like Omar S.