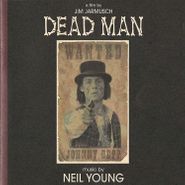 When Neil Young improvised the score to Jim Jarmusch's hallucinatory, revisionist-western did he know it would become the revered cult classic it is now? One can hardly bring up the '90s indie film without mentioning its introspective, sparse, sometimes violent guitar and lonely organ rumblings, which create textures both tense and serene. Finally, after over twenty years, Neil Young's Dead Man soundtrack is being reissued on vinyl and CD. Though the score is purely instrumental, interspersed throughout the record are short bits of dialogue from the film's stars, Johnny Depp and Gary Farmer. Let yourself drift off with this moody, pure, one of a kind recording, and keep your ears open for a cameo of Iggy Pop's scene from the film.