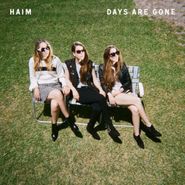 With catchy pop hooks, R&B-tinged grooves, and pure rock and roll swagger, Haim’s debut is the kind of sunny album that keeps the summer rollicking all winter long.

L.A. sister trio HAIM have seemingly been around so long, it’s hard to believe Days Are Gone is only their debut LP. That’s due to the band trickling out singles throughout the year that that have gotten better and better, all of which are included here. “Falling” moves on an echoing drum pulse and middle sister Danielle Haim’s husky, breathy vocals, falling somewhere between Christine McVie and Fiona Apple, and careful, creeping guitar riffs. “Forever” moves on an ’80s R&B shuffle, while the sisters’ back-and-forth vocal aerobics and harmonies employed Este, Danielle and Alana Haim showcase their greatest strength—the inborn chemistry fostered by playing in a band together since childhood. Their best song yet, “The Wire,” is bold enough to get called a Shania Twain knockoff by Portishead’s Geoff Barrow—they must be doing something right. Its Gary Glitter strut allows Danielle to really vamp and play the relieved ex-lover with glee, while youngest sister Alana steals the show with her swaggery second verse. The rest of Days Are Gone isn’t as strong as that dynamite opening, but even when the songs feel overstuffed, the sisters’ boundless energy makes the entire thing such an entertaining ride that you won’t mind the occasional whiplash. The details really make it worthwhile—the way the guitars pulse like they’re emulating synthesizers on “If I Could Change Your Mind,” the crazy, warped Miami Sound Machine-style vocals on the title track. We haven’t had a pop band like this in years, one with both the smarts and technical capability to call to mind classic pop acts from Fleetwood Mac through Destiny’s Child in one feel swoop. And Days Are Gone will no doubt make young women everywhere ask for guitars and pull their sisters into jam sessions. For that alone, we’re thankful for Haim.