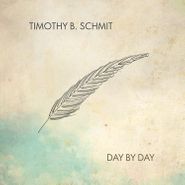 Eagles vocalist and bassist Timothy B. Schmit’s Day By Day is a star-studded affair with a down-to-earth feeling. (Lindsey Buckingham, Jackson Browne, John Fogerty, Benmont Tench, Jim Keltner, John McFee, and Kenny Wayne Shepherd all perform alongside Schmit on the album.) These songs are a testament to Schmit’s status as both an artist and an icon. They feel rooted in the history of contemporary rock ’n’ roll in a solid, inspired way. They also showcase Schmit’s diverse talents as the tracks move seamlessly from folkier acoustic cuts to grooved out rockers that harness that old Eagles magic. Fans will dig discovering the many dimensions of Schmit’s songwriting and they’ll keep coming back for more.