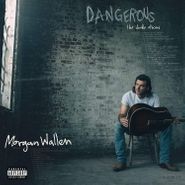 Country artist Morgan Wallen follows up his platinum-selling album If I Know Me with a new double record called Dangerous. The 30 tracks here are a testament to Wallen's crossover pop appeal, something he references in his growly voice on the disillusioned "Livin' The Dream." This is radio-friendly pop sung with a twang, especially on tracks like the romantic ballad "Somebody's Problem." Wallen calls attention to his accent in "Still Goin Down" as being the product of a town that's "more podunk than pop," but it's a little like Jennifer Lopez insisting she's "still Jenny from the block." Wallen's star has clearly risen and Dangerous is just as likely to win over adult contemporary fans as anyone listening to country.