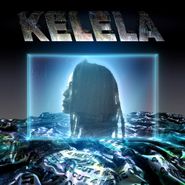 Sexy, paranoid, futuristic R&B from the coolest new kid on the block, Cut 4 Me is Kelela’s knockout debut, finally released on CD and vinyl. With production help from the likes of Nguzunguzu, Bok Bok, Girl Unit and a host of other L.A. underground artists, Kelela updates the hip hop/R&B of the sort TLC and Missy Elliot were making around the turn of the millennium. Dig into the spare “Enemy” (produced by Nguzunguzu) or the haunting “Bank Head” (produced by Kingdom) for a taste of what she can do. The three-LP deluxe edition adds a number of the many remixes that have come out since Cut 4 Me first hit as a mixtape, offering a couple of new versions of some of Cut 4 Me’s best tracks (“Keep It Cool,” “Go All Night”) and a remix of “Enemy” that out-trips the original. Considering what a producers’ showcase Cut 4 Me was to begin with, the remixes don’t feel extraneous, standing alone almost as completely new tracks for Kelela’s soulful cool to brood over.