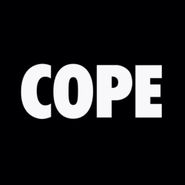 Manchester Orchestra’s fourth album is the biggest thing they’ve ever done—in both scope and sound. Massively loud but with a core of catchy, radio-ready melodies, Cope sounds in part like a throwback to the blown-out sounds and emotions of mid-’90s alt-rock, especially The Smashing Pumpkins’ Mellon Collie and the Infinite Sadness, from which “Top Notch’s” nasal cries and melodic guitar bends borrow heavily, and the emocore that followed in its wake. But Cope doesn’t waste time whining. Songs like “Choose You” recall the melodically advanced yet heavy-guitar-focused sound of Pinkerton-era Weezer, placing equal weight on emotion and melody. “Girl Harbor” is also terrifically catchy, placing harmonic choruses over ascendant guitars that lift the song off the ground. Manchester Orchestra frontman Andy Hull says their mission was to make a “crazy-loud rock record,” and they’ve certainly succeeded in that regard, but they thankfully haven’t forsaken melody or dynamics to any degree, as a carefully written song like “Every Stone” would attest. Hull’s way with a singalong melody keeps Cope afloat amid a sea of would-be alt-rock revivalists, as songs like “All That I Really Wanted” stick in your head on first listen. 1996 has never sounded better.