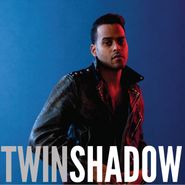 Twin Shadow is George Lewis Jr. This is his second album. Another seriously addictive synthy album. And another album from Brooklyn. He is sort of a combination of Stephin Merritt and Marc Almond. This album will get you dancing. Or will at least make you imagine yourself dancing. More fun than what you might expect from 4AD. A fantastic second album from this dude.

The second album from George Lewis Jr. is a more sophisticated affair than his excellent debut record, moving from bedroom pop to the outright new romantic swagger that previously was just implied by the music. His songs have lost none of their immaculate detail, though. “Golden Light” is immediately memorable for its big chorus, with Lewis at the peak of his Phil Collins/Peter Gabriel style of throaty, emotive vocals, but the verses are impeccably put together, too. First single “Five Seconds” has the same sort of “Boys of Summer” rush that Forget’s “Slow” had, but it’s no cheap retread — it sounds taken apart and put back together, as Lewis unleashes his pipes at unexpected moments, and the whole thing has such a wonderful hushed tension that it’s enthralling throughout. Confess shows Lewis can really go for it pop-wise while still engaging listeners with layered songs and well-considered production choices.