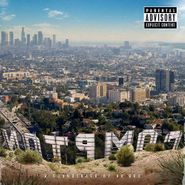 With the release of the biopic Straight Outta Compton about pioneering hip hop group N.W.A., Dr. Dre has found himself rejuvenated as an artist. The rapper and onetime N.W.A. member has long been largely behind the scenes as a producer and businessman, but there’s still been hope he’d release something of his own, with a long-promised Detox album now shelved. That’s for the better; with an artist of Dre’s caliber, we’d rather have something polished to compare with his first two solo albums, and Compton, a companion piece to the film, doesn’t disappoint. Among A-list guest spots (Kendrick Lamar, Snoop Dogg, Eminem) and lush jazz-funk production by Dre and a score of others, the album finds Dre looking back at his legacy. “Goddammit, I'm too old, I forgot I got it all/But Andre young enough to still get involved” he says on “Talk About It,” embodying his younger self to hang with the next generation he’s helped mentor. Dre tells the story of Compton’s troubled history (along with fellow Compton native Lamar) on standout “Genocide,” with dizzying production by Dem Jointz and a sick hook by Marsha Ambrosius. It should go without saying that the rapping across Compton is jaw droppingly great, not least of all by Dre himself, who raps circles around the young’uns on tracks like “It’s All On Me.” It’s too soon to call Compton a new hip hop classic, but with countless memorable moments across the album’s 16 tracks, it’s looking that way. Certainly it’s an appropriately great finale to Dr. Dre’s rap career, and along with Straight Outta Compton, nicely caps off an important part of hip hop history.