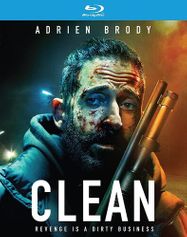 The fellow residents of his sketchy NYC neighborhood only knew the garbage man called Clean (Adrien Brody) as a quiet but kindly Samaritan. However, the past he never spoke about was marked by tragedy-and violence-and he'll bring vicious skills to bear when the machinations of the local drug lord (Glenn Fleshler) impact the teenage girl (Chandler DuPont) he'd taken under his wing. Intense crime drama co-scripted by Brody co-stars Richie Merritt, Michelle Wilson. 94 min. Widescreen; Soundtrack: English.