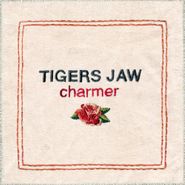 Tiger's Jaw is a band treading the increasingly irrelevant line between pop-punk and power-pop and on this, their new album, the first since some internal re-organization, the band leans toward the latter with a slower tempo and more complex compositional dynamics, more intricate chord voicings, and more nuanced ways of expressing a decidedly contemporary melancholy pining, rife with romantic disappointment and a shuffling millenial ennui. The guitars still tear like paper and crackle like flames but at a tempo more suited to campfire than arson. There's a new jitteriness in their sound, a nervous and occasionally discordant tapping of muted 16th notes that come across as vaguely new wave, especially when paired with vocalist Adam McIlwee's increasingly laconic pleas. The laconic pleading usually gives way to an anthemic mopey caterwaul, too American for Morrissey but too skinny and pale for Springsteen. Charmer is an album that should appeal to a broader swath of listeners than the band's previous releases and, as always, those genre taxonomists resistant to change will call sell-out, but at the end of the day, this is music that is too intimate, too abject in its emotional content to ever properly sell out, even if it wanted to. And that, my friends, is an achievement.