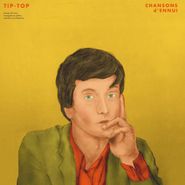 Jarvis Cocker’s CHANSONS d'ENNUI Tip-Top is the accompanying album to Wes Anderson’s new picture, The French Dispatch. It’s a standalone listening experience rich in the usual Cocker qualities: sophistication, swooning romance, and cheerful ennui. The album is based around Anderson and Cocker’s cover collaboration from the film, Christophe’s old school French pop hit, “Aline.” The rest of the album consists of covers of French classics from the same era, including works originally be Serge Gainsbourg, Brigitte Bardot, Francoise Hardy, and Jacques Dutronc. A delight for fans of Jarvis Cocker, Wes Anderson, French pop, and albums that transport you to another time and place.