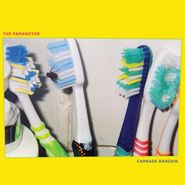 The Paranoyds make an impressive debut with Carnage Bargain, drawing effortlessly on references like The Breeders and Sonic Youth. The songs feature accessible hooks buried in garage-rock distortion and Riot Grrl apathy, spiced up with keyboard. “Girlfriend Degree” sounds like one of the stronger tracks on the new L7 record, and “Face First” mesmerizes with harmonizing lead guitar, buzzy feedback and droning verses. Songs like “Courtney” and “Hungry Sam” stand out from the '90s lovefest with their near-New Wave quirkiness, the latter hinting at Devo with its delightfully spastic keyboard parts.