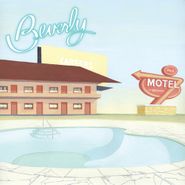 Fizzy, alt-rock distortion, cooing, girlish vocals and surf-pop melodies make up this duo’s incredibly likable debut record. With Frankie Rose (of solo, Vivian Girls and Crystal Stilts fame) on board, Drew Citron’s delicate songs get just the right amount of rhythmic punch and fuzzy bite. The songs range from sweet and easy (“Honey Do”) to kind of creepy and menacing (“Planet Birthday”) in a quiet girl in the back of the class kind of way. It’s not the most original thing you’ve ever heard—you can easily pick out the Pixies/Breeders references on songs like “Madora”—but that shouldn’t curb your enjoyment, as these two are far from the first to pull from that well. They’re even better on songs like “All the Things,” which build from that mold but stretch into strange ways, blending melodies and chords into the grays in between the bright color bands. And the production is pure ’80s college rock heaven, sounding like remastered C86 tracks or early Rough Trade songs that hadn’t seen the light of day before. So, you may know what you’re getting with Beverly, but in the capable hands of these two, that proves to be a very good thing.