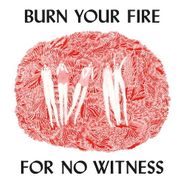 “If you still have some light in you, then go before it’s gone,” Angel Olsen sings on the harrowing “White Fire,” the slow-burning centerpiece of her stunning new album, Burn Your Fire For No Witness. Olsen doles out hard-won truths and tragicomic observances in a voice that splits the difference between Emmylou Harris’ sweet coo and Cat Power’s smoky drawl, sometimes coming through just above a whisper, though she can wake the dead when she wishes, reserving her power for choice moments, belting at the core of the Velvetsy “High & Wild.” The former member of Bonnie “Prince” Billy’s band seems to have poured every inch of herself into her breakthrough album, going for a full-tilt rock stomp on songs like “Forgiven/Forgotten,” referencing Hank Williams on gleeful ode to loneliness “Hi-Five” and virtually fading into the ether on beautiful songs like “Dance Slow Decades,” begging you to sit closely. Burn Your Fire For No Witness is one of the best albums of the year thus far, an emotional trip that leaves its mark.