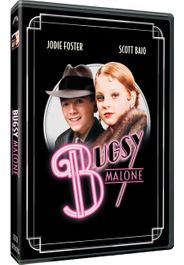 In this unique mobster movie, Scott Baio heads up a prepubescent cast (that includes Jodie Foster) as the title character, a child gangster determined to rule over New York City. Instead of throwing fists or bullets, the Prohibition-era kiddie mobsters sling confections at one another. When Bugsy learns that a rival gang has developed a secret weapon capable of firing sweets as quick as a machine gun shoots bullets, he sets out to heist the high-tech tart-launcher. The engaging silliness is periodically spirited forward by several song-and-dance numbers composed by bubblegum pop maestro Paul Williams.