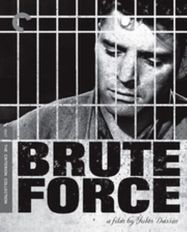 As hard-hitting as it's title, Brute Force was one of Jules Dassin's first forays into the crime genre, a prison melodrama with a scathing critique of the punitive American incarceration system at it's heart. Burt Lancaster is the timeworn Joe Collins, who, along with his fellow inmates, lives under the heavy thumb of the sadistic, power-tripping guard Captain Munsey (a riveting Hume Cronyn). Only Collins's dreams of escape keep him going, but how can he possibly bust out of Munsey's chains? Matter-of-fact and ferocious, Brute Force builds to an explosive climax that shows the lengths men will go to when fighting for their freedom, and asks the question of who society's real brutes are.