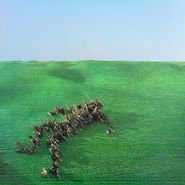 On their debut, Bright Green Field, British art-rock band Squid summons acts like New York's Bodega with talky vocals and post-punk grooves. The quirky effects swirling around the guitars and the frantic energy on "Paddling" make it an album highlight. "Pamphlets" leans toward math rock with its busy rhythmic interplay, while "Narrator ft. Martha Skye Murphy" is reminiscent of LCD Soundsystem's "Daft Punk Is Playing At My House" with its raucous vocal and prominent bass.