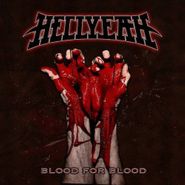 Album four from American chug-metal supergroup finds the boys once again relaxing into charmingly aggro midtempo grooves supported by rumbling bass and the torturously sung and screamed vocals of Mudvayne's Chad Gray. If you're unfamiliar with Hellyeah's membership or simply forgot due to brain damage sustained headbanging, let's recap. Aside from Gray, we have founding-Panteran Vinnie Paul, Nothingface braintrust Tom Maxwell, and, until recently Damageplan bass-punisher Bob Kakaha aka Bob Zilla. Zilla's been replaced on this record by Bloodsimple bassist Kyle Sanders and while Damageplan fans might be disappointed, there's really no way the addition of Sanders could possibly be counted as a disappointment overall. As for the music, the band continues to transition from the side-project-supergroup end of the spectrum towards the full-fledged-band side and, on this latest record, the results are pretty heavy. This record SLAMS, make no mistake. Between explosive syncopated fills, verses are snaking, chugging, groove-fests, opening up onto huge pummeling choruses. The lyrical content is sort of classic dark-psychedelic cool tuff-guy stuff, and Gray's rhythmic delivery works wonders with the palm-muted mastery of the rhythm guitar's constant onslaught. Supergroup indeed.