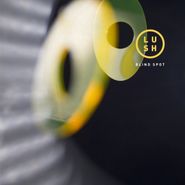 Reunions are a tricky prospect. For every Dinosaur Jr. that can miraculously pick up the pieces, overcome interband turmoil and release some of the best music of their careers, there’s a load of bands who succumb to that same ol’ conflict after wringing the festival circuit for all its worth.

Thankfully, Blind Spot, the new EP from reunited shoegazers Lush, follows the path set by Dino Jr. At just four songs, it cherry picks the best sounds of their three studio albums without feeling like too much of a rehash, leaning toward the sound of their earlier, stronger material. Sparse bits of keyboard and piano round out the band’s guitar-pedaled sound, adding a subtle new element that could easily expand things down the line.

“Lost Boy” reminds us of how unsettling and dramatic Lush’s songs could be, full of too-close, eerie melodies. But “Burnham Beeches” will likely be most people’s favorite, full of the kind of gleaming guitars found on classics like Split’s “Lit Up” or Lovelife highlight “Shake Baby Shake.” “Rosebud” is a slowly unfurling blanket of a ballad that coasts the EP to a stop.

Part of the success of Lush’s reunion on record may be because of not only how tragic the band’s demise was, with the suicide of drummer Chris Acland in 1996 effectively ending the band, but also because of how untimely it was. The band was at the peak of its popularity at the time, navigating Britpop’s waters with a more straightforward sound that was hit-or-miss, but promising. So we’re all rooting for Lush in this reunion, which has brought them sold-out shows and a high-profile gig at Coachella. And thankfully, Blind Spot delivers. Along with that box set of LP reissues the band just put out for Record Store Day, it’s a perfect way to trigger fond memories from longtime fans or introduce newbies to the band’s heavenly sound.