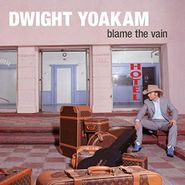 In honor of its 15th anniversary, Dwight Yoakam’s now-classic Blame the Vain is getting reissued — and pressed on wax for the first time ever. Effortlessly straddling the line between mainstream country and its weirder, less polished cousin alt-country, Blame the Vain is the perfect example of Yoakam’s enviable ability to merge the two. Bursting with energy and boot-stompin’ melodies, the album is one of the most purely enjoyable country listening experiences you’ll have this year. This is one solid record: Blame the Vain sounds as fresh as the day it was first released in 2005.