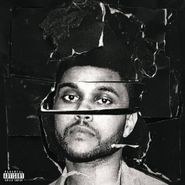 Alternative R&B artist The Weeknd has gone from underground sensation to worldwide phenomenon, thanks to critical success of albums like House of Balloons and his association with acts like Drake. Beauty Behind the Madness steps up the energy from 2013’s Kiss Land, which wasn’t a bad album but failed to fully capitalize on his indie cred. No such thing with Beauty, which comes on strong and doesn’t let up. The gloriously hedonistic “The Hills” manages to build a radio-ready R&B slow burner while folding in the more experimental elements upon which Abel Tesfaye made his name—a digitally clawed-up croon, atmospheric backdrop and strange effects, like a sampled horror-movie scream acting as a chorus cue. “Earned It,” used in 50 Shades of Grey, goes the other route, a cool jazz ballad with classy strings and lyrics that are more suggestive than crude. “Often” dazzles with its ghostly production, and Tesfaye keeps the party moving on the MJ-ish “Can’t Feel My Face.” Lyrically, Tesfaye leaves something to be desired in the way he sings about women—he’s better off in the parts of “Tell Your Friends” that just focus on doing drugs and funny wordplay (“I'm never rocking white, I'm like a racist”). Throughout Beauty, Tesfaye’s sound is flawlessly constructed, and his voice has grown remarkably from its breathy beginnings to a confidence level that would make him appealing even without his estimable songwriting and production skills. Beauty Behind the Madness is the album that finally, truly announces Tesfaye’s arrival as an A-lister. It’ll be tough to find a more entertaining (or inventive) R&B album released this year.