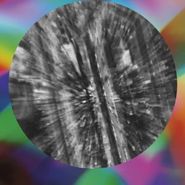 Kieran Hebden, now in his 30s, has been releasing challenging, experimental electronic and sample based music as Four Tet since 1999, making him a wise old weirdy of the current EDM and post-IDM communities taking over the globe right now. While his current electronic concerns are potentially less abstract and decidedly more house-y than they've ever been before, this reviewer imagines these beatier concerns as latent to his practice, lying relatively dormant until the time was right and the conditions were particularly welcoming/generative. Not that Hebden has ever cared about being welcomed, the other tasks keeping him busy lately have been free jazz collaborations and running his eclectic label, Text, which is releasing Beautiful Rewind. BR has had almost no press, no previews, pre-orders, or ads popping up anywhere. Hebden has handled the entire process himself through his own label, promoting and explaining the conditions of the release on his Twitter. If the record sounds less avant-sample and more current, the methods of its expression aren't, which reflect the underlying still-weirdness of the tracks contained here. Every Four Tet record so far has been essential, this is no exception.