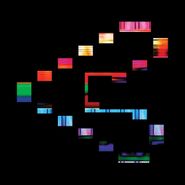 Tom Jenkinson’s long running Squarepusher project returns after a 5 year hiatus with Be Up a Hello. If there’s one through line to be drawn between Jenkinson’s works of the last decade, it’s the inscrutable album titles and unpredictable rhythms, with not much else in between. Following the state of the art software that aided 2015’s Damogen Furies, along with that album’s maximalist production, Be Up a Hello is billed as a 180 of sorts, with Jenkinson “using a bewildering array of vintage analogue and digital hardware,” including none other than a circa-1980 Commodore VIC computer. Yet don’t assume this retro approach implies that there is any sort of quaintness to be found. Squarepusher has earned a reputation as featuring some of the most sonically overwhelming IBM in existence, and that brand of controlled entropy is everywhere to be found on songs like “Terminal Slam” and “Vortrack,” which in particular resembles a Resident Evil video game soundtrack undergoing some sort of MKULTRA psychedelic psychosis. “Nervelevers” comes closest to pure vintage electronica, evolving the late ‘90s with a heavily techno-influenced bass line over skittering breakbeat. Yet it sits firmly in the 21st century via pure juxtaposition: featuring a heart stopping, dubstep-inspired drop rendered in 8-bit textures by the Commodore’s telltale bleep-bloops. Jenkinson once held a personal mantra that “you use your brain to make music, not your wallet, so I can make music with anything.” Though he later attributed this to youthful arrogance more than anything, Be Up a Hello proves that, for the umpteenth time, he’s not wrong.