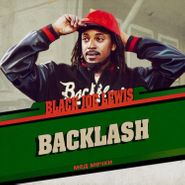 Is it crazy to describe Black Joe Lewis as a mix of soul, funk, garage, and blues? With meticulous lyrics that would make any singer-songwriter green with envy, loud electric guitars, and a large band that feels anachronistic in electronic-loving 2017, it's admittedly very hard to just toss him off as a single genre artist. Plus with Lewis' unique scream leading the way, Backlash is the most fun you'll have with an album in a while. Having taken a nearly three-year hiatus since his last album, Lewis has continuously toured the world and he brings the fiery energy of his live shows straight to this recording. Though tracks like "Global" and "Shadow People" show him exploring more chaotic, even psychedelic territory, nothing tops the power of "PTP." Shamelessly stuck in the '70s with power brass and tenor sax riffs, Lewis makes one of his mightiest and danciest soul songs. Replete with an intense guitar solo that feels like he's venting his romantic frustration right through his instrument, he crafts a song that will instantly get your heart pumping fast. With the recent popular cache of capturing the sounds of the past (even through the actual recording method itself), Black Joe Lewis and the Honeybears manage to sound simultaneously vintage and modern. This is what rock music should always feel like.