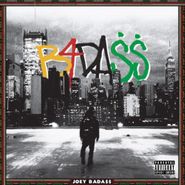 As the young Brooklyn based rapper approaches his twentieth year on this earth he also approaches the release of his first full length album. Joey Bada$$, having earned some well deserved credit over the last couple years, balances the old and the new with B4.DA.$$. The young MC is known for his rhyming, his ear for production and most importantly his penchant for the boom-bap rap era. But instead of being a rehashing of his '90s predecessors like the previously released EP Summer Knights was, B4.DA.$$ looks to blend those elements with a more modern sound. The album seems to ride this fine line of imitation and modern innovation. With beats from DJ Premier on “Paper Trail$” as well as the The Roots and Dilla on “Like Me,” the reverence is hard to miss. It isn’t until you reach cuts from Statik Selektah like the third single off the record “No.99” who even uses an altered version A Tribe Called Quest beat that you get a feel for what Bada$$ is capable of sonically. It’s not just reverence and imitation, Joey Bada$$ is building on the successors of the past with eyes plainly in the future. If he maintains this pace his talent and imagination will soon surpass his need for reverence.