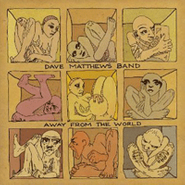 Dave Matthews Band suffered a tragedy when founding member saxophonist LeRoi Moore died in 2008. Since then the band has soldiered on, releasing 2009’s well-received Big Whiskey & the GrooGrux King, but there’s a sense that the band is wounded, missing its Moore’s presence. That sense of loss is present on Away From the World, the title of which Matthews has said has to do with the idea that we all are born and die alone. Songs like the “Crash Into Me”-esque “Mercy,” bustling “Gaucho,” with huge drumming and children’s chanting, and appropriately titled “Sweet” have a certain darkness hanging over them. But it has made for the band’s strongest and most cohesive statement in some time. Even when things look dark, the band still offers one of its trademark good-times jams with “Belly Belly,” which makes a winning refrain out of the “Jack & Jill” nursery rhyme. Longtime fans will welcome Dave Matthews Band back with Away From the World.