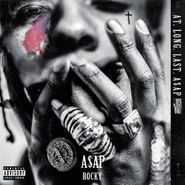 A$AP Rocky’s weed-and-codeine-fueled hip hop reaches new highs on his second studio album. With production by Danger Mouse and many others, At.Long.Last.A$AP is a deep, strange trip. “Holy Ghost” opens the album on its strongest note as Rocky struggles to resolve his beliefs with the drugs and sex he raps about, ending with Rocky on his knees and claiming “I got my own relationship with God” while Danger Mouse’s somber production intones around him. Much of the first half of At.Long.Last.A$AP blends together in a narcotic haze, which sounds pretty amazing, depending on your outlook. As the album progresses on, Rocky lets loose with a few singles that aim for crossover appeal, perhaps best on “Lord Pretty Flacko Jodye 2 (LPFJ2),” a follow-up to previous single “Pretty Flocko” that shows off his pure MC skills. It’s not always clear what he’s getting on about across the album’s expanse, but it rarely sounds less than inspired, handling well-picked guest spots from the likes of M.I.A., Lil Wayne, ScHoolboyQ and singer/songwriter Joe Fox, while his vintage Kanye-style duet with West himself on “Jukebox Joints” is a clear highlight. At.Long.Last.A$AP is by turns gripping and obscure, making for a fascinating listen that keeps A$AP Rocky in the upper echelon of indie-approved streetwise artists.