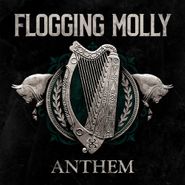 On their first album in five years, Flogging Molly rock harder than ever. Maybe that’s due in part to the band’s re-teaming with legendary musician and Swagger and Drunken Lullabies engineer Steve Albini, the underground legend behind the punishing sounds of Big Black and Shellac. Maybe that’s also due in part to the band grappling with the restless times we’re all living in; they’ve got a song called “These Times Have Got Me Drinking,” (which to be fair, could’ve probably come on any Flogging Molly album over the past twenty years), but there’s also “A Song of Liberty,” which is dedicated to the defenders of Ukraine. Singer/guitarist Dave King calls the album “back to basics” and Anthem certainly does showcase Flogging Molly doing what they do best—creating rousing, working class anthems with driving riffs and traditional Celtic melodies.