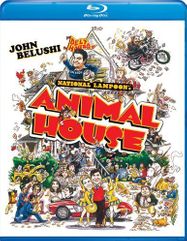 The impact that National Lampoon Magazine had on American comedy during the 1970s was enormous, eventually spawning the massively ripped-off comedy movie National Lampoon's Animal House (as well as the Vacation series and some crappy forgettable flicks). You could say that the long running sketch comedy show Saturday Night Live symbolically evolved from National Lampoon (as well as from the Second City comedy clubs in Chicago and Toronto). Following the success of SNL's first breakout star, Chevy Chase, John Belushi would earn a cult following from his performance in Animal House that would last past his untimely death four years later from a drug overdose, leading the way for SNL alumni to dominate comedy for decades.

Animal House follows two freshmen, Pinto (Tom Hulce) and Kent (Stephen Furst), "a wimp and a blimp," at Faber College in 1962. After being turned away from the elite fraternities they end up joining "the worst house on campus," Delta House. These campus outlaws are in constant trouble with Dean Wormer (brilliantly played by the snaky John Vernon of Point Blank), as they are placed on “double secret probation.” Eschewing academics or athletics, Delta members are either out to get wasted or laid, lead by would-be playboy, Otter (Tim Matheson), and super slob, Bluto (Belushi). There are a number of memorable scenes including Pinto and fellow Delta, Boon (Peter Riegert), along with his girlfriend, Katy (Karen Allen), being introduced to pot by a professor (Donald Sutherland); Belushi's stroll through the cafeteria line hoarding food and then his zit imitation; the guys' trip to a Rhythm N Blues club where Otis Day and the Knights perform (a scene ripped off in Weird Science). After the fraternity is expelled their revenge on the school's parade is one of the great scenes of comic mayhem.

Using the classic "snobs vs slobs" comedy mold used to perfection by The Marx Brothers, The Three Stooges, and Bog Hope many years before Animal House, it’s easy to root for the underdogs against the self-serious campus elites. The Deltas may actually also be rich kids, but their goal is fun, not academic advancement. Interesting, setting the film just before the Kennedy assassination and a pre-Vietnam war explosion gives the Deltas a greater innocence and even a pass on their behavior; in retrospect we know where the world is going and some harmless college antics seem almost adorable compared to the seriousness that will be overtaking college campuses by the end of the decade.

By the end of the '70s the slapstick work of Mel Brooks and Woody Allen would reach its peak, and that National Lampoon/SNL humor would come to dominate comedy, the anti-authority humor, with lots of drug and sex references and a dash of nudity, for instance the early films of Bill Murray (Where The Buffalo Roam, Stripes, Caddyshack, even the more kid friendly, Meatballs). The Animal House formula would be repeated over and over, from the good (Revenge Of The Nerds) to the bad (Porky’s). The reverberation of Animal House has been impacting movies for decades and is still being felt, from Fast Times At Ridgemont High to the “gross-out humor“ of the Farrelly Brothers (There’s Something About Mary) to the American Pie flicks (and all the crap in between - Fraternity Vacation, PCU, The Wild Life, etc.).

Even Steven Spielberg jumped on the Animal House bandwagon with his loud WWII comedy 1941, having Belushi and Matheson practically repeating their same Animal House roles. For 1941, Spielberg would also borrow from the massive destruction at the end of Animal House; however, missing the point, bigger is not necessarily funnier. Belushi’s next feature, The Blues Brothers (also directed by Animal House’s bearded helmer John Landis), would take the approach to wild extremes, with mixed results. Belushi would only make two more films after that, Continental Divide and Neighbors, both justifiably forgotten. For the college comedy genre, Animal House is the peak, the standard-bearer. For Belushi and much of the cast, Animal House would be their best film. Of course Hulce would famously jam as Mozart in Amadeus and then disappear back in to obscurity; Karen Allen would do Raiders Of The Lost Ark; and, popping up as one of the opposing frat boys, Chip Diller was a young Kevin Bacon in his first film.

Coming off The Kentucky Fried Movie, besides Michael Jackson’s "Thriller" video, Animal House is also the highlight for director Landis, who would continue looking for the Animal House magic again and again with SNL alumni in basically forgettable films like Trading Places, Three Amigos!, Spies Like Us (getting even lower was his trial for actor Vic Morrow's death on the set of the Twilight Zone: The Movie; though he was acquitted, his reputation was devastated). Besides film, Animal House's biggest cultural impact may have been on college (and high school) campuses as students imitated the film's Roman toga party. To this day the toga party is a rite of passage on many campuses all because of its use in Animal House. Earlier in the decade the pursuit of academic promise was showcased and admired in The Paper Chase, but by the end of the '70s and into the '80s, the new face of college life was Belushi’s slovenly Bluto.

Dean Wormer is determined to expel the Delta Tau Chi Fraternity, a motley crew of misfits and sociopaths bent on disrupting the well-starched status quo of Faber College.