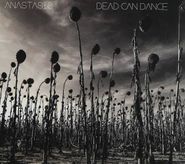 Dead Can Dance’s music is one of high concept, sewing various world musics across centuries into its black cape of 4AD goth glory. So given the duo of Brendan Perry and Lisa Gerrard haven’t released an album since 1996’s Spiritchaser, and the demise of their relationship as lovers, it seems only fitting to hear Anastis (Greek for “resurrection”) in terms of the band as a concept. The death march drums and elegiac stringed instrument that open “Kiko” give way to a powerful, mournful vocal from Gerrard. Similarly, “Anabasis” moves on the sound of relentless, clanging percussion and unsettling melodic lines that rise to a climactic cry from Gerrard, but it’s also a perfect example of DCD’s ability to appeal both to world music and underground rock fans — both goth and gothic, if you will — as its synths blend with stringed instruments that predate the use of electricity, and its melodies would sound perfectly fitting played on electric guitars. However, despite the music’s usual grimness, there’s also that sense of revival hinted at by the title, and it comes through on tracks like opener “Children of the Sun,” which builds an expansive chamber sound on which Perry intones “We are the children of the sun/Our journey’s just begun.” Perry has said Anastasis is the beginning of a new era for the band, which will continue with a “regeneration” period; if Anastasis is the sound of death, it is one draped in the most beautiful attire and stately ceremony.