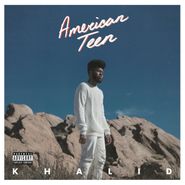 It's hard to not to look forward to Khalid's debut, American Teen, after hearing the hit single "Location." Though he's a native of El Paso, TX, "Location" is pure Los Angeles with an atmosphere of stoned partying, chill vibes, and romantic longing. There's a sense of unsure masculinity with a beat that's more private press electro soul than modern hip hop. It perfectly captures the feeling of disconnected youth and love. Treading somewhere in the realm of neo-soul hip hop and unbridled sunshiny pop, the 18-year old's debut rejects any notion of nihilism and bitterness to create an album that's pure happiness. Goofy synth harmonies and drums straight out of Jan Hammer's Miami Vice theme song, along with Khalid's voice that's stuck between smooth soul and southern gent, give this album a unique flavor that's unheard on other albums. The title track itself reveals the album's ethos in one line: "living a good life full of good vibes." In his ode to American optimism and teenage hopefulness, there's a real sense of being grateful for his success that's captured beautifully in this addictive pop song. "Shot Down" may be more downtempo and even sad sounding, but it never gets negative. It's the perfect embodiment of difficult feelings that seem almost impossible to define and comprehend. Khalid's debut feels needed today more than ever as the media is an endless stream of negativity. There's no sense of darkness when his voice beautifully comes out in his songs. Just one listen to this album and you get the sense that things aren't as bad as they feel.