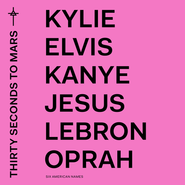 Yeah, so maybe Jared Leto is a bit of a weirdo. As of this writing, he can be currently found hitchhiking across America to promote Thirty Seconds To Mars’ latest album, the aptly named…um, America. Don’t let any of that noise distract from the fact that Thirty Seconds have truly gone for broke this time around, aiming for the Billboard stratosphere. This thing has hooks, people. Seemingly every song starts with a dramatic intro, fraught with impeccably crafted tension, before exploding into a dramatic spectacle of stadium-sized sing-a-long choruses and a bombardment of synthesized instruments that’s downright orchestral in scope. Sure, there are plenty of popular groups who are privy to this formula, your Imagine Dragons and Chainsmokers and what have you. Yet Leto excels at what many other lack: a genuine and dynamic vocal presence. Influenced by the Michael Hutchence school of deploying both a sultry, low-pitched croon and the ability to belt with the best of them when necessary, Thirty Seconds throw some vintage INXS moves into their millennial whooping. On an album of big moments, the devil is in the details.