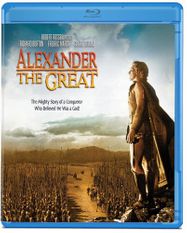 Richard Burton (Equus) portrays the Macedonian king who declared himself emperor in director Robert Rossen’s (The Hustler) big-screen biographical epic Alexander the Great. Tracing his rise to power and glory as he conquered the known world, Alexander the Great also features top-notch supporting performances by Fredric March (A Star is Born), Claire Bloom (The Spy Who Came in from the Cold), Danielle Darrieux (The Earrings of Madame de...), Stanley Baker (Accident), Harry Andrews (Solomon and Sheba), and Michael Hordern (Where Eagles Dare).