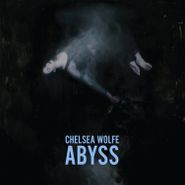 On Abyss, Chelsea Wolfe embraces the industrial music and doom metal that have always lurked as influences and adds them as blackened flourishes to her gothy experimental electro-folk. “Carrion Flowers” writhes slowly on a corroded beat that hits like a door slamming beneath her curling and cooing voice. Groaning guitar noise introduces “Iron Moon” as Wolfe’s entrée into the metal world (save for her celebrated cover of black metal band Burzum’s “Black Spell of Destruction”). The eerie, wiry strings and sludgy power chords of “Dragged Out” become a pummeling wash at the chorus, which is reminiscent of Sunn O))), for whom she’s opened in the past. The album’s opening is bold, but echoes of her past work radiate through Abyss, on its strings, which can be achingly beautiful on tracks like “Maw” but wail like banshees on “Crazy Love,” or on the wavering synths of “After the Fall” (seemingly the only thing left over from some of the synth-driven exercises of her last album, Pain is Beauty). The biggest holdover here, besides an overall grim aesthetic, is Wolfe’s voice, which can sometimes get buried but breaks through the din to emote beautifully on “After the Fall” and “Crazy Love.” Some fans might bristle at the changes she’s made, but most will likely find the heavier sound suits Wolfe’s compositions and voice quite well. Besides being great on its own as an album, Abyss hopefully will add another chink in the armor of the seemingly closed-off and overwhelmingly male world of critically respected, heavy guitar-based music.