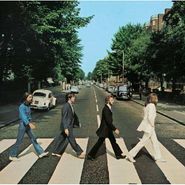 Abbey Road was the second to last record released by The Beatles but was, in fact, the last album they recorded. After fighting broke up the band on multiple occasions, the Beatles re-teamed with their legendary, old-school producer George Martin to create one final album where they could strip it back to how they used to play and have fun again. From beginning to end the album is raw and heavy, yet sweet and charming. One of my favorite parts of the album is the "medley" on side two that begins with "You Never Give Me Your Money" and ends with "The End." It consists of a few short or partial songs all edited together to create a little mini-story that is one of the best collections of music EVER! It is perfect in my heart. And on top of all that, this album contains the one and only drum solo on any Beatles record, and this drum solo is what made me want to play the drums as a kid, and is why I am finally learning to play the drums today!

Abbey Road is the Beatles swan song. A mammoth masterpiece. The finest finale ever. Musically, the band is incredibly tight and focused. Lyrically they are light-hearted and optimistic. Vocally, they are indescribable. George’s luscious “Something” and “Here Comes The Sun” are by far his most realized songs as a Beatle. “Oh! Darling” and “I Want You (She’s So Heavy)” are relentless rockers, the latter threatening to build infinitely. “Octopus’s Garden” and “Maxwell’s Silver Hammer” are deliciously and decidedly silly. John’s “Come Together” is a classic rock heavyweight. The song cycle (mainly written by Paul) that covers the second side of the album is pure gold. Starting with the impossible to re-create harmonies of the prelude “Because” to the arcing “You Never Give Me Your Money” to the atmospheric guitar and harmony of “Sun King,” the medley gives and gives. The light-hearted “Mean Mr. Mustard” and the punchy “Polythene Pam” make for an excellent interlude before the final push. “She Came In Through The Bathroom Window” is restless and searching. “Golden Slumbers” finds peace. “Carry That Weight” affirms. “The End” is… the end. If the love you make is equal to the love take (it is), and music is love (it is), the Beatles have an endless stream coming their way. Abbey Road is the glorious conclusion to a staggeringly creative and influential seven-year run.