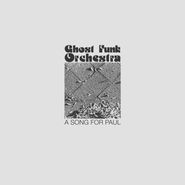 Drifting in from another spookier, more soulful universe comes Ghost Funk Orchestra’s A Song for Paul. Led by one-man producer, arranger, and musician Seth Applebaum, the band fuses retro soul, funk, and psych together, with gritty production and fuzzed out guitars. The band says it best themselves: it’s an album that sounds “like a lost score to a Quentin Tarantino film.” Get hip, get with it, and get this thing on your turntable because once you put the needle down, you won’t want to take it off.