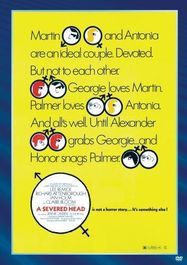 Based on the novel by Iris Murdoch, director Dick Clement's black comedy about the sexual escapades of upper crust Brits is a terrific satire of swinging 60's London with a fantastic cast. Upon learning that his wife Antonia (the beautiful Lee Remick) is having an affair with his best friend, Palmer (Richard Attenborough), who is also her psychiatrist, Martin Lynch-Gibbon (Ian Holm) is plunged into agony. Martin's longstanding mistress Georgie (Jennie Linden) is ecstatic with the hope that Martin, now free from Antonia, will marry her - but Martin is too busy trying to woo his wife back to pay much attention to Georgie, leaving her free to explore other partners. Throw in a few more characters/love partners: Martin's brother, and Palmer's sister (Clive Revill and Claire Bloom), and the finale of this boudoir version of musical chairs becomes impossible to guess! Newly remastered


This product is expected to play back in DVD Video "play only" devices, and may not play in other DVD devices, including recorders and PC drives.