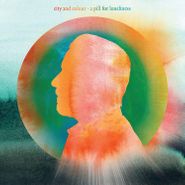 Alexisonfire vocalist and guitarist Dallas Green releases his sixth solo album under the City & Colour moniker with A Pill For Loneliness. It’s a fitting title for Green’s eternally melancholy brand of singer/songwriter rock, as these 11 songs often sound like the product of a solitary mind, yearning for meaningful human connection. The song names themselves hint as much; “Strangers,” “Me and the Moonlight,” and “Astronaut” all suggest the loneliness of the title, yet in markedly different ways. “Strangers” takes a post-punk beat and relentlessly minor-key melody in a desperate plea for reconciliation, while “Astronaut” is an expansive, post-Britpop ballad that gradually turns into an extended psych guitar workout, sounding like the intersection between such strange bedfellows as Coldplay, The Verve, and Mazzy Star. The lyrics may often be heavy, but that doesn’t mean the experience has to be, as A Pill For Loneliness features a wonderful cornucopia of sounds and textures in its tireless exploration of the state of being eternally bummed out.