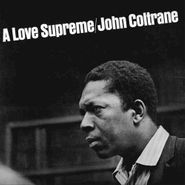 Recorded in December1964 and released early the following year, John Coltrane's A Love Supreme is a deeply spiritual and moving jazz album that captures the great tenor sax player at the height of his powers. It was recorded with his indomitable "classic quartet": pianist McCoy Tyner (a legend in his own right), highly sympathetic bassist Jimmy Garrison, and the hard-swinging Elvin Jones on drums. At this stage in his career, Coltrane was nearing the end of a particular phase, and A Love Supreme is the ultimate expression of that era. He would soon augment and then dismantle the quartet heard here and plunge into free jazz. On this LP, though, he and his sidemen play deep and exploratory jazz, while generally remaining within the confines of hard bop and modal jazz. Moreover, the music on A Love Supreme evokes a profound striving for unity with a higher power. The titles of the album's four lengthy tracks suggest this, as well: "Acknowledgment," "Resolution," "Pursuance," and "Psalm." The name of the album comes from a vocal chant toward the end of "Acknowledgment," in which Coltrane repeats the words "a love supreme" as a mantra. Intensely moving and passionately performed, A Love Supreme has appeared on many lists of the greatest albums of all-time and is certainly among the very best that jazz has to offer.