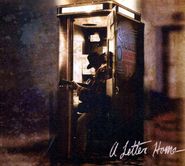 The story behind Neil Young's latest release tends to supersede the music itself. The album of classic folk covers was recorded in an old-timey vinyl recording booth that Jack White refurbished and is housed at White's Third Man Studios. Leave it to the adventurous Young to record an entire album in a novelty arcade attraction. But the booth gives the album an endlessly intriguing feel, both immediate and nostalgic, like a faded polaroid. Instead of a heavy-handed, overly reverential set of covers, we get an album that pops and hisses, given the recording tool's limitations, and feels alive, given Young's one-take performances. His performance of Bert Jansch's anti-drug ballad "Needle of Death," for instance, feels desperate and essential as Young gives a heartfelt vocal and his guitar warps and twists, adding unintentional shading to a heavy song. While A Letter Home may be seen as a gimmicky one-off, it's got feeling etched into its grooves.