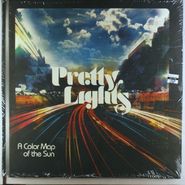 Electronic music wunderkind Derek Vincent Smith has made a name for himself by warping soul and hip-hop samples into arena-friendly dance jams. For his fourth album (and first in four years), Smith has done things a bit differently. Perhaps having dipped enough into the pre-recorded sample well, Smith has composed his own music from which to sample, which is included on A Color Map of the Sun’s second disc. The process was even recorded for a documentary. Luckily, that process doesn’t outshine the new music he’s created from those samples. “Press Pause” creates breathtaking beauty from its soul roots. “Let’s Get Busy” is a block-rockin’ party jam, and “Around the Block” utilizes cut-up raps from the great Talib Kweli over a psychedelic, hip-hop Western backdrop. The work and care that has gone into A Color Map of the Sun is apparent, as the smeared, faded beauty of a song like “Go Down Sunshine” sounds fully formed from the ground up. He may make the rest of us feel like lazy bums, running his own record label and painstakingly creating his own records, but Smith’s A Color Map of the Sun doesn’t sound overworked. Rather, it’s as laid-back as it is masterful, a great summer record with an intriguing backstory to boot.