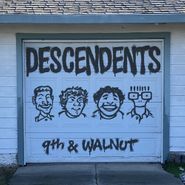 Descendents’ 9th & Walnut has an interesting backstory. It’s the legendary punk band’s eighth studio album, featuring songs that were recorded in 2002 and 2020, but written between 1977-1980, before their now classic debut Milo Goes to College was released. (9th & Walnut also features new versions of the band’s 1979 debut single and B-side, “Ride the Wild” and “It’s a Hectic World.” So, that’s all well and good, but how does it sound? Happily, it sounds straight up awesome. Bristling, ferocious and tightly-wound, this new-old collection of songs is a gift for fans of classic punk.