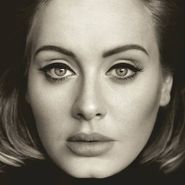 After four long years, Adele’s follow-up to her smash album 21 was worth the way. With pipes as powerful as Aretha’s and insightful lyrics, she’s our premiere pop chronicler of relationships and breakups. The belt she unleashes on “Hello” sends shivers, but it’s easy to underestimate the economy of songwriting she and co-writer Greg Kurstin put into it. Indie singer/songwriter Tobias Jesso Jr.’s Elton John-inspired craft perfectly suits Adele on their song “When We Were Young,” which captures the nostalgia you feel for a moment just after it happens. As with 21, Adele relies more on classic elements than overly modern production, but that doesn’t hurt the music one bit. Adele makes the quarter-life crisis a thing to be celebrated on the stunning 25.