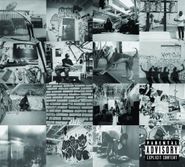 Trash Talk truly sound like the voice of outsiders on 119, decrying the pain, suffering and corruption they see in the world around them on the explosive “Exile on Broadway.” Clearly, Trash Talk aren’t interested in producing fun party rock on 119. They’re more indebted to classic hardcore bands (especially Black Flag and Bad Brains), keeping with its history as music of protest and serious subject matter while keeping things hard, fast and quick. Odd Future’s Tyler, the Creator and Hodgy Beats growl and chant over heavy sludge on “Blossom & Burn,” speaking to the positive effects of having Trash Talk sign to the mostly hip-hop-based Odd Future Records. But Trash Talk’s smart hardcore speaks for itself, too. Just listen to “F.E.B.N.,” which spends a good chunk of its less than two minute running time building its beat before unleashing riffs that could withstand a hurricane, which is pretty much what frontman Lee Spielman delivers with his slashing vocals. Whatever exile Trash Talk may feel, they express being young and full of piss ’n’ vinegar so well that countless kids who know the feeling will likely crowd around 119.

They're on the Odd Future label, but they're not hip-hop -- in fact, Trash Talk is pure screaming Sacramento hardcore thrash, hearkening back to the classic sound of early '80s California punk. But it's really not much of a stretch. After all, Odd Future is thematically almost closer to skate-punk than it is to the hip-hop family tree, and when Trash Talk shows up at an Odd Future show to perform "Radicals" with Tyler & co., it's truly revelatory. It takes you back to that exciting time when punk rock and hip-hop were actually threatening to the mainstream, not just another way of making money, mansions and commercial tie-ins. And that's what's so great about this Trash Talk record -- it's the real deal, truly agonizing, exhilarating, raw, horrible, genius hardcore, fourteen songs in 23 minutes with no future and nothing to lose. With these guys and Off! on the loose, could we be seeing the start of a return to truly freaked-out rock & roll insanity? This record kind of gives me hope.