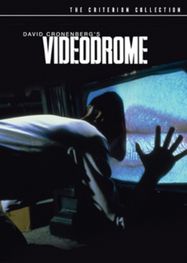 Let’s revisit the early 1980s. Picture yourself removed from all forms of technology that are now so familiar and seem to endlessly grow. We’re talking Internet, texting, Blu-ray, and even modern day cable television. Now imagine that satellite television is the most exciting concept. Let’s also imagine the thrill of recording and watching something on videocassette. Supposing you are one of the privileged few who has access to this technology, what would you choose to watch? Remember, you’re now able, for the first time, to pull video feed from anywhere with this satellite into your home. How much would you want to devour with your own eyes and in what ways might it change the way you live?

I have something I want you to watch. Its name is Videodrome. Directed and written by David Cronenberg, it is a film with a philosophy about a mind-altering pseudo-program that has a philosophy of its own. James Woods plays Max Renn—the president of a small cable television channel that presents exclusive and mostly erotic content. His idea is simple: allow people to manifest their desires at home and, as a result, keep it off the streets. While working with his assistant he comes across segments of a pirated television show called Videodrome. In short, Videodrome is a near primitive display of unlucky souls who are tortured and/or raped, never to return onscreen. The simplicity and terror of the program is unlike anything he’s ever seen. He wants to share this vision with his viewers, thus beginning a quest to find its source.

Along the way, he meets Nicki Brand (Deborah Harry)—a sadomasochistic, attractive woman whose intrigue and profession as a radio emotional therapist only complicates his world of over-stimulus. Brand later seeks involvement with the show. Her interest in mixing pain and pleasure, along with Videodrome’s perversion, only sparks Renn to see more of her and it, and not just for the sake of work. It becomes a literal syndrome where a rumored tumor develops in his brain from the video’s signals, causing hallucinations and actions that are nothing short of nightmares.

Videodrome is different from your typical psycho-analytical thriller, or horror film for that matter. Cronenberg is not necessarily being pushy in this story of a tumor caused by exposure to a show, but is rather delivering a metaphorical future with a message. Perhaps the most impressive aspect of this vision is that it is done without the aid of the modern and oftentimes overused effects of cinema—as in, computers. The special effects are amazing and, frankly, quite terrifying. A personal favorite is the vaginal-like orifice that appears on Renn's stomach during hallucination, later to birth tyranny after Videodrome is injected into it. Quite fitting for theme of Renn being a whore for media.

James Woods seems to be the perfect candidate for harum-scarum characters, if not addicts. As in movies like The Boost and Another Day in Paradise, his knack for acting in sticky situations and getting into trouble is always a treat and done with complete involvement and skill. I’d assume that it is not easy to often portray the underdog, but Woods seems to shift its very definition and give these characters power and (sometimes) humility. I’d like to add that Woods, though equipped with several other actors who only enhance this experience, is basically holding the weight of most of the dialogue and action. Impressive, to say the least.

It really is a shame that many filmmakers have taken the easy way out when it comes to thrillers and horror films. The concept behind what you are doing should be something that knocks on the door of fear. Not to show something gory through the use of computers, squibs, and terrible acting. Terror’s only friends in the film world should be those who know him best. Cronenberg coined, “Long live the new flesh!” I say long live the old way of making good horror films and thrillers!

When Max Renn goes looking for edgy new shows for his sleazy cable TV station, he stumbles across the pirate broadcast of a hyperviolent torture show called Videodrome. As he struggles to unearth the origins of the program, he embarks on a hallucinatory journey into a shadow world of right-wing conspiracies, sadomasochistic sex games, and bodily transformation. Starring James Woods and Deborah Harry in one of her first film roles, Videodrome is one of writer/director David Cronenberg’s most original and provocative works, fusing social commentary with shocking elements of sex and violence. With groundbreaking special effects makeup by Academy Award®-winner Rick Baker, Videodrome has come to be regarded as one of the most influential and mind-bending science fiction films of the 1980s.